I am not feeling the blogging vibe


For some reason the words aren't coming and what does come sound stilted and forced. I have been trying for days to write a post and have deleted all of them. So. Stilted and forced it will be.


I have been sewing, but I haven't been following my previously published plan. (sigh)  I think I have mentioned in a previous post that I make The Husband's scrubs for work. A lot of his scrubs have been developing holes and I had four fabrics in his stash (strangely much smaller than mine??), so I have been a good wife and sewing for him. I have two finished and one cut out. Which of course in classic passive aggressiveness I made a mistake in cutting, it is fixable, but I have some figuring to do so as not to have it look like I made a mistake in cutting. Damn. The pattern I use is much modified Simplicity 2769. The main changes I have made is the pockets. The Husband's favorite hobby is to try to rip all the pockets off his scrubs, which as you can imagine annoys me greatly, especially as I have to fix them. Threatening him with a painful lingering death if he continues to tear them has had no effect, so I had to change the pockets. I have figured out that if I move to pockets away from center and have one edge joined at the side seam and the bottom enclosed in the hem the pockets stay intact longer. If anyone out there has any other ideas about pocket placement or whatever else I can do to make the damn things last longer, please share. I will be grateful.


I have done some sewing gadget shopping lately and I have to share some of my new favorites. The first and really fun one is a needle case thingy. It looks like a lipstick, and rolls up the needles like a lipstick does. The needles are held with a magnet. Here is a photo. I got it at a local quilting shop, but I couldn't find an online seller in the US or Canada that carries it, only the UK. There is actually a video showing how this works on YouTube. For some reason I think that is hysterical. Or maybe I am hysterical. Whatever.

The next couple are from Nancy's Notions. I ordered some pattern tracing material and impulsively threw these in my basket as well. Good picks. The first one is the Pattern Notcher, it is perfect for those of us that use a rotary cutter to cut our fabric. This clever gadget takes a tiny (1/4" x 1/16")  sliver of fabric instead of trying to cut tiny triangles. I love it. The other one is Black Roll A Pattern, very handy for tracing patterns

I am spending the entire day (from 10:30 a.m. PST) watching the pre-pre-pre Oscars, pre-pre Oscars,etc, while catching up on my ironing. I figure if I am going to waste hours watching TV, I may as well get something accomplished. Right? Right.

My name is Elle and I am a Sewing Magazine Addict

I will buy any and all sewing magazines published. There I said it. HOWEVER, I have bought two lately that have me rethinking this practice.

The first magazine is the latest edition of Sewstylish, which is published by Taunton Press, the company who also publishes my beloved Threads magazine. You would think with a lineage like that they couldn't go wrong. Well, IMHO you would be, well, wrong. I don't buy this kind of magazine to make the items shown in it, I buy them for inspiration, and while there are some things that I think I can use in this issue, there are others that are Oh My Dear God What Were They Thinking? The worst (IMO) is the article "The Piece Movement". Fugly, really fugly. Loving hands at home look. They look like something your vision impaired, taste challenged Grandmother would make for you and you would never wear. Ever. They make a suggestion that their inspiration comes from Seminole patchwork, and that may be where they started, but they made a bad turn somewhere. I think Seminole patchwork done well is Art, this is Not. The other really bad one is "Bows Galore", which basically consists of putting multiple bows any where at all on t-shirts. Definitely Dorky.

The second magazine is Sew It All. It should be called Never Sew Any Of It. Maybe too harsh. Okay, definitely too harsh. I have looked through it again and there are some good ideas in it, but the one that really sticks with me is this:

Why would anyone want to do this to a nice pair of jeans who never did anything to hurt anyone? Why?  There is other things that I think are equally hideous, but I am going to allow for differences in taste and not post pictures of them.

The moral of the story is: Take your time looking over magazines before you buy. I have already saved myself $15.99 by not buying the current issue of Stitch magazine. It was almost all crafty sewing, and I can find plenty of ideas for that on the interwebs. Of course I immediately went and bought more fabric with the $15.99. Now if I can find more magazines not to buy, I can buy more fabric. Makes perfect sense.
Posted by LC at 1:43 PM 12 comments:

Email ThisBlogThis!Share to TwitterShare to FacebookShare to Pinterest
Labels: fugly, Sew It All, Sewstylish


This is the second Kwik Sew pattern that I have used, and I have to say, I really like them. I love the size of the instruction sheet for one, the instructions seem to be clearer and better illustrated,  and the fact that the patterns are printed on better quality paper is a bonus as well. The first one was of course, 2908, for panties, which I have blogged about excessively, no need to revisit it. Right? Even though I have made more.

I have made 4 camisoles for the Husbands Aunt Edna. The pattern calls for a woven, with the neck and armholes finished with bias strips. I used nylon tricot instead (scored a bolt of it at the thrift store, super cheap) so I cut the strips on the cross grain. This fabric isn't the easiest to work with, but it can be tamed with Spray Starch (capitalized on purpose, it earned it). The neckline is trimmed in the round, ie you sew the ends of the strips together and then sew them on the neck, the armhole trim is sewn flat and then the side seams are sewn. I made the first one like that but it doesn't look as nice, I prefer a cleaner finish. For the second, third, fourth etc I finished the armholes the same way as the neck. Looks much nicer and doesn't take that much more time or fiddling.

I made the mistake of SWT (sewing while tired) and accidentally made two tiny snips in one of the tops. The fabric won't ravel or run or anything, and Edna would never notice but you can't give someone something with holes in it, right? So I found lace in my pile of notions (who knew???), trimmed a couple of motifs and sewed them on the camisole. Not my best work, but what the heck.

Some notes and suggestions (mainly for me for when I make more of these, lol). I didn't use the pattern for the strips, I just cut strips across the width of the fabric (108" btw), and then measured the neckline and armholes to cut the strips. After cutting the strips from the tricot, I immediately starched, folded them in half and ironed them. I also used the strips to finish the hem.  If/when I make this pattern from a woven, I will use french seams for the shoulder and side seams. It would take almost no time, looks much nicer, and would feel nicer to sleep in.

Aunt Edna is thrilled with them. She says they feel much better than all the other camisoles she has. I suspect she is more pleased with the concept that someone actually sewed something just for her. Sorry no pictures of Edna wearing one of the camisoles-TMI. 8-)

In my previous post, I promised pictures of the fabric for my next couple of projects. Here goes. 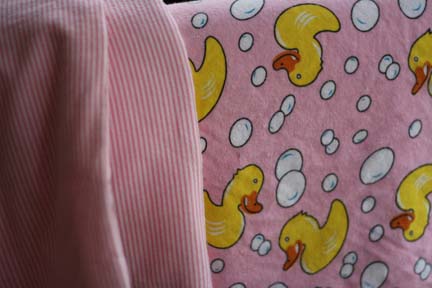 next up on the sewing docket

I am following one of my favorite bloggers example (http://jillybejoyful.blogspot.com/)  and I am going to plan my sewing in an organized and grown up manner, which is out of character. Ask anyone who knows me.

I have to do some sewing for my husband's Aunt Edna, she needs camisoles and commercially available ones don't fit well at all. She has narrow sloping shoulders and is not a skinny person. She has cerebral palsy and her left side isn't well developed so it may take some work to make them fit her properly. I am going to use  OOP Kwik Sew 2239 as a starting point. I am going to use the usual lingerie type fabric, nylon tricot. It is what she is used to wearing and I scored a bolt of it at the thrift store. 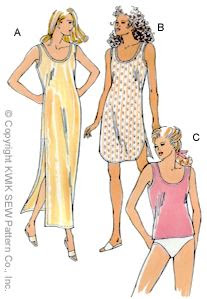 I need some pajama bottoms, and again copying Jilly, I am going to make them from a normal pants pattern as a wearable muslin, one or all of these patterns, Vogue 1096 by Sandra Betzina, Vogue 8397  by Marcy Tilton, or Vogue 8637 by Marcy Tilton. Something about that last sentence sounds wrong, I can't be bothered to figure out why, but I wanted it to be known that I was aware of it. I have some zebra print cotton flannel and some pink rubber duck cotton flannel. Pictures to follow. Should be cute, no? 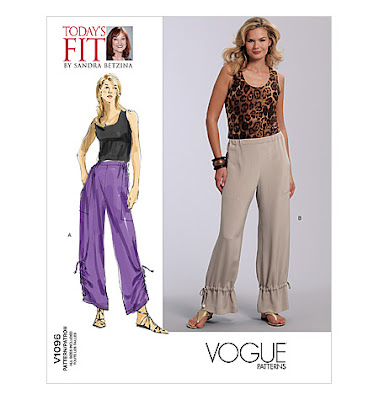 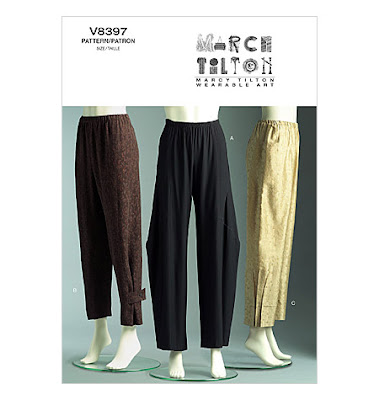 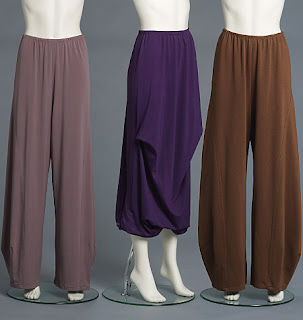 I want to try Sham's tablecloth skirt http://communingwithfabric.blogspot.com/, I fully expect that I will look as big as a table in it, which is why I am going to use some perfectly horrible taffeta plaid (emerald green, fuchsia, purple, yellow, gold metallic threads etc) that someone kindly gave me. If I don't want to kill myself after seeing how big I look in it, I have some lovely fabric set aside for it. Again, pictures to follow.

I also have to make the Sorbetto. Maybe out of some turquoise linen I have somewhere.

There now I have committed myself.  To sewing not an institution. Maybe I will actually follow through.
Posted by LC at 9:18 AM 5 comments:

ElleC
Kelowna, British Columbia, Canada
I have been happily married for over 30 years (don't know how I got that old). I am creative, love sewing, photography, basically any crafts at all (yes, I am a craft whore), I love dogs, currently share my life with 4 of them, make that 5 dogs. I love to read and have far too many books. If you would like to contact me you can reach me at ellecsews at gmail dot com.